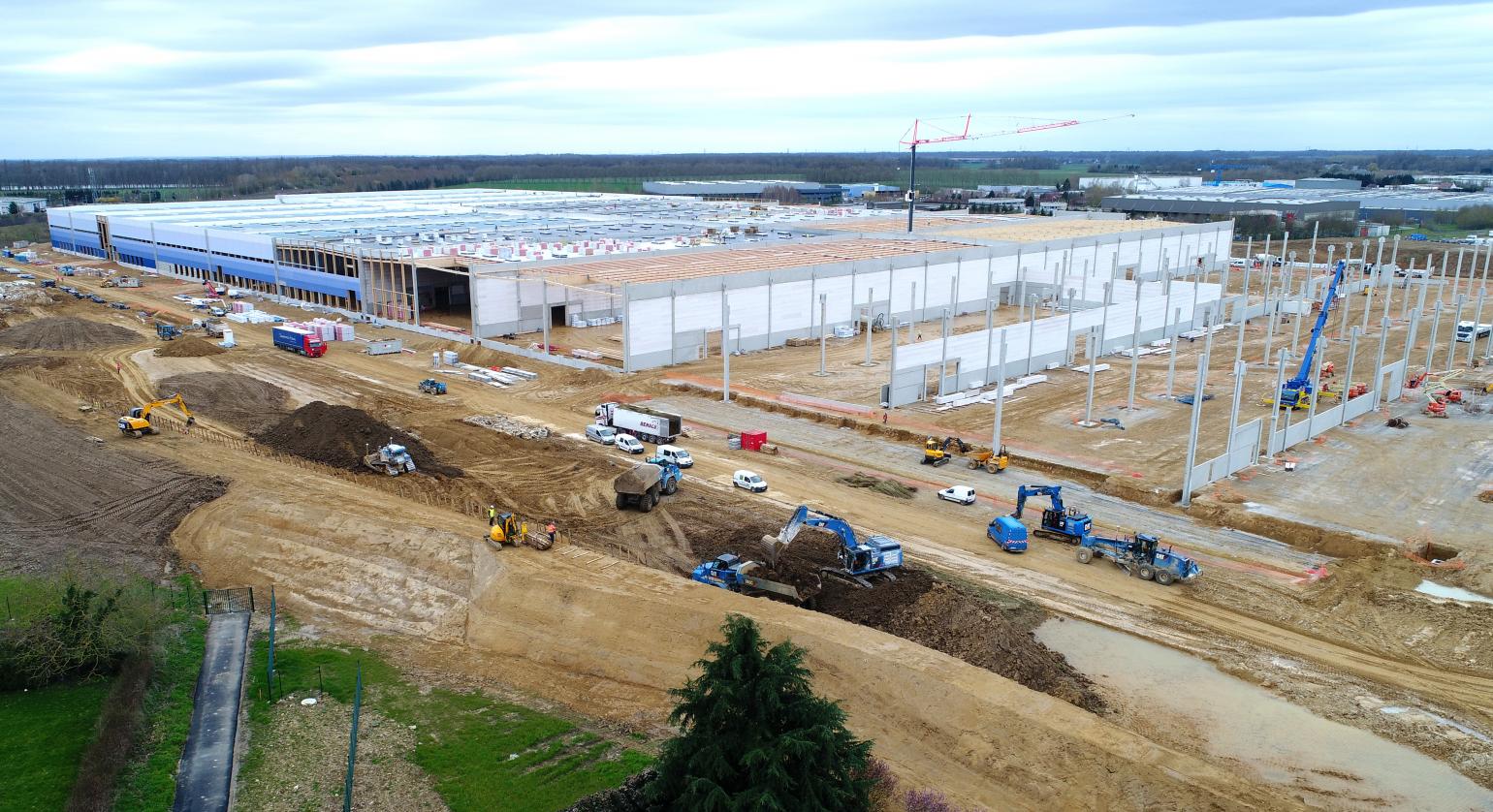 CONSTRUCTION BY IDEC OF FRANCE’S BIGGEST WAREHOUSE: HOW WORK IS GOING #4

Each month, IDEC invites you to dive into the work going on at the impressive logistics platform for CONFORAMA, which is currently being built by its teams in Tournan en Brie. The erection of this building continues as they wish to respect the schedule initially planned to allow the completion and handover of the first units ahead of schedule. After looking at the roof going on, the installation of the cladding and concrete mixer, today, you can watch how the concrete is prepared, the flooring poured in, with the first blocks appearing above ground level for the offices and we look at the work done by Pierrick, Chief Site Manager for IDEC.

The concrete required for the flooring in this 200,000 m² logistics platform requires careful attention and a special organisation. The project benefits from a concrete mixer installed directly on site, offering a production capacity of between 400 and 600 m3 par jour. All of the raw materials are stored on the spot, in particular the cement and aggregates. The quantity of water is adjusted each day after analysing the humidity levels of the raw materials so as to offer the perfect mix. Finally, metal fibres are added at the last moment and the steel reinforcements are placed in particular points to ensure excellent resistance.

The flooring is poured in

Once the unit has its rook and openings sealed, the IDEC teams supervise the flooring. The first stage involves levelling off the concrete and this is followed by adding a fine layer of sand measuring one or two centimetres. All of this is then covered with a polyane film, which enables a maximum amount of water to remain in the concrete. The builders can then start pouring thanks to the delivery by three concrete lorries, which move to and fro all day. After manually adjusting the level, a special machine is used to level it off, which makes the concrete vibrate and smoothes it out. This Laser Screed is adjusted based on level zero thanks to a reference point in each unit. 5 or 6 hours after the concrete is poured in, a second machine smoothes it down and polishes it. The final stage involves applying a special curing compound to limit the evaporation of water and enable the concrete to dry perfectly.

The first office block appears out of the ground

At the same time, the first office block is gradually appearing out of the ground. The builders are installing the metal framework, which rises up three levels, on the foundations poured in at the same time as for the other units. The final one hoisted using a nacelle crane takes five weeks to assemble with all the different parts it comprises. The next stage involves laying down the slabs on each level. These metal elements with an average thickness of 10 centimetres will each be given a layer of concrete, which will then form the floors for this 1500 m² office block.

First part handed over ahead of schedule in June

Six months after work first started for IDEC, the construction of this mega project with 31 units is moving forward rapidly, in spite of some tricky weather this winter. The platform is thus about to be finished on the final six units. The foundations have been poured in up to units 24 and 25, while the installation of fire doors has been done up to units 22 and 23 and the roof is finished on half of the project, which represents a surface area of almost 100,000 m². The first five units of the first phase are due to be handed over in mid-June, followed a month later by units 6 to 11, as well as the computer room installed on the ground floor of the office block.

The unique character of this project requires total investment from the men and women involved to ensure its success. We met up with Pierrick, Chief Site Manager with IDEC, who told us about his role in the construction of this exceptional project.

“I am in charge of monitoring all of the different technical and architectural aspects for this project. That involves many different types of work, from the metal frame for the offices to the technical elements and the paint. My role is to coordinate the work done by around twenty partner firms, who are working alongside us on this operation. I am also in charge of making sure we adapt and plan for any changes requested by the clients concerning the technical choices so that they may find the best solution for their future organisation. Being involved in the work done on the construction of this logistics project is of course a huge challenge, which requires everything to be well organised, because of its size so that all the work can be monitored, even though it is being done twenty units apart. The numbers concerning this project give us an idea of the incredible dimensions, such as the 63 kilometres of piping installed for the sprinkler system.”